The Mead-Hall as a symbol of good and order, the good life, were warriors are safe, and eat, drink and sing (Universitat de València, 2012). The feast is a formal celebration marked by ceremonial gift-giving (Staver, 2005). Mead-halls such as Heorot in Beowulf were places where warriors would gather in the presence of their lord to boast and tell stories.

Then the due time arrived

for Halfdane’s son to proceed to the hall.

The king himself would sit down to feast.

No group ever gathered in greater numbers

or better order around the ring-giver.

The benches filled with famous men

who fell to with relish; round upon round

of mead was passed; those powerful kinsmen,

Hrothgar and Hrothulf, were in high spirits

in the raftered hall. Inside Heorot

there was nothing but friendship. The Shielding nation

was not yet familiar with feud and betrayal. (Heaney, 2002,

It represented a safe place for warriors returning from battle, where traditions were preserved, loyalty was rewarded and reputations were spread. The scholar T. Shippey (2008) highlights the rich variety of names with halls are addressed through the poem:

For drinking in (‘winehall’, ‘beerhall’, ‘meadhall’); they are filled with people (‘guesthall’, ‘retainer-hall’); in them worth is recognized (‘gold-hall’, ‘gifthall’, ‘ringhall’). It is this ‘loud merriment in hall’ which Grendel hears and hates from the beginning, while Hrothgar’s poet sings ‘clear in Heorot’ on every one of the three night Beowulf spends there. (pp. 64-65)

Mead-halls offered protection and peace, since the world portrayed in the Anglo-Saxon poem is set in a dangerous time – the idea of the hall as a place of joy and security until threatened by external forces of evil, plays a major part in the poem (Webster, 2002). The hall equals happiness which in turn equals light; whereas monsters are creatures of the night, ‘shadow-walkers’, ‘lurkers in darkness’, things which have to be under cover by dawn (Shippey, 2008). 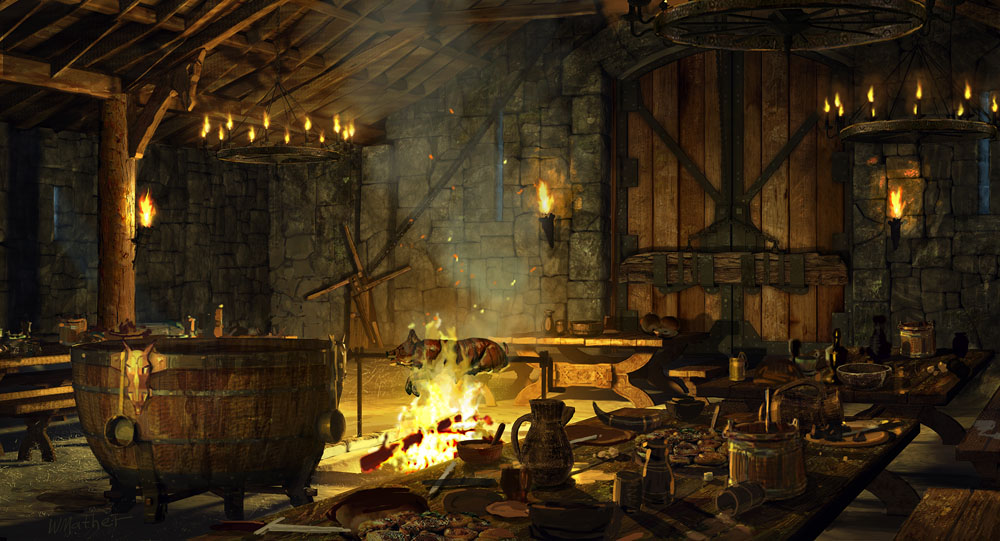 In the mead-halls like Heorot, banquets represent the restoration of order and harmony in society (Universitat de València, 2012). After the fight with Grendel, the servants of Hrothgar mop up the blood, cover the splintered pillars, repair the benches, and sand the claw-marks off the walls before covering them with tapestries (Staver, 2005, p. 58). The rebuilding of the damaged mead-hall symbolizes the rebirth of the community. In addition, banquets have ceremonial functions as well, such as the election of new rulers, the forge of marriage alliances and war-related decisions. Hollander and Kermode find feasts to be chosen as a time for making such statements because “the heart is then open and exalted” (1973, p. 24).